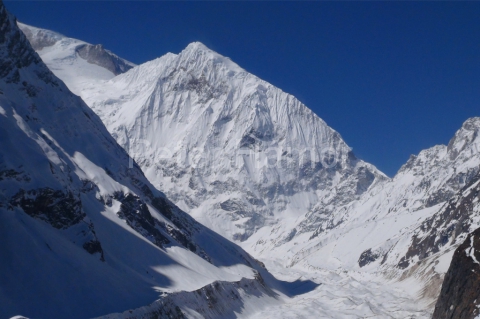 The 8th highest mountain on Earth with its altitude of 8,163 metres, Manaslu is located entirely in Nepal, in the Mansiri Himal mountains, Gurkha mountain range, some 70 kilometres from Annapurna – its closest 8000m neighbour. The mountain’s name originates in Sanskrit and translates as “the Mountain of the Spirit”. It was climbed for the first time by Toshio Imanishi and Sherpa Gyalzen Norbu, members of a Japanese expedition, on 9th May 1956. The first winter ascent was accomplished by Polish mountaineers Maciej Berbeka and Ryszard Gajewski who summited under extremely unfavourable conditions in January 1984. In 1997, two Slovak mountaineers Peter Sperka and Miroslav Rybansky climbed Manaslu. Another member of their expedition Juraj Kardhordo was last seen on the ridge near the main summit and Miro Rybansky died during the descent. This seemingly peaceful mountain is still considered to be one of the most dangerous 8000m peaks.